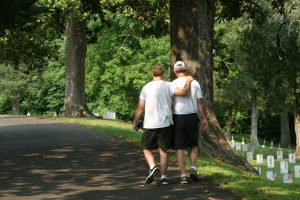 Gentrification is a process of renovation and revival of deteriorated urban neighborhoods by means of influx of more affluent residents. The result of this influx of money is typically increased property values along with the displacement of lower-income families and often small businesses. In larger cities, gentrification has increased tremendously in recent decades. The pattern has been similar in many cities. A city grew during the early part of the 20th century as a result of the industrial revolution and the economic boom created by World War II. As the city sprawled into the surrounding countryside, creating suburbs for the wealthier residents, the inner city began to decay. Inner city slums became the norm because only the poorest residents lived downtown. Toward the latter half of the 20th century, however, many cities started to take a hard look at their downtown areas and the opportunities they presented. Young urban professionals who worked in the city’s high rises began to see the potential advantages to living close to work. Moreover, property values were at rock bottom, meaning a home could be purchased for pennies on the dollar and then renovated, offering a very attractive financial investment opportunity. Governments also began offering incentives to lure middle and upper class property owners back to the inner city. In short, gentrification seemed a “win-win” proposition for everyone – except the people who were displaced as a result. By the turn of the 21st century, large cities all across America were jumping on the gentrification bandwagon.

Why Does Gentrification Trigger the Need for Estate Planning?

If your parents live in an area that has already been through the gentrification process, or that has been identified as a good prospect for gentrification, they likely need to revise their estate plan as a result. Why? Because there is a very good chance that the value of their property has increased significantly as a result of that gentrification. “Location, location, location” is the mantra when it comes to real estate, meaning that a property’s location determines its value. Your parents’ home may once have been located in a low income, inner city, dilapidated neighborhood; however, if the area where the home is located, or even an area close by, has been gentrified, the home’s value will reflect that gentrification. Think of it as “appreciation by association.” A home that was worth $50,000 ten years ago could now be worth $250,000 – or more – simply because the neighborhood has gone through gentrification. The same is true if your parents own a small business and/or own commercial property in the area. As the affluent move back in, property values move up.

Consequently, your parents need to revise their estate plan to reflect the increased value in one of their primary assets. Not only does the increased value of their home mean they have more assets to gift to beneficiaries, but he increased value of their home could impact your parents’ eligibility for Medicaid if they need to qualify at some point in order to cover the high cost of long-term care. As you can see, the gentrification of a neighborhood can cause a ripple effect. Be sure your parents are aware of that effect and that they consult with an experienced California estate planning attorney to make any changes that need to be made in their estate plan as a result of that effect.

To Schedule a Free Consultation

If you are interested in the possibility of working with our firm after learning these facts, please select our “Workshops” tab to RSVP for a free estate planning workshop. At that workshop you will be offered a free one-hour consultation with an attorney:  https://collinslawgroup.comseminars/