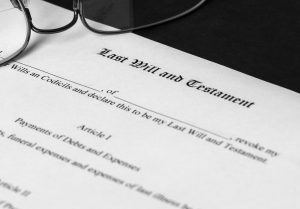 There is no doubt that people do some strange things with their money. Surviving loved ones are often surprised to learn that a decedent left the bulk of his/her fortune to charity or that someone was completely cut out of the Will for no known reason. Those surprises, however, pale in comparison to what some people have included in their Will. Believe it or not, the following are actual provisions people included in their Last Will and Testament.

Well-known comedian Jack Benny included a truly romantic provision in his Last Will and Testament when he died in 1974. “Every day since Jack has gone the florist has delivered one long-stemmed red rose to my home,” his widow Mary Livingstone wrote in a magazine, shortly after his death. “I learned Jack actually had included a provision for the flowers in his Will. One red rose to be delivered to me every day for the rest of my life.”

A philanthropic anonymous decedent included a bequest of a half-million pounds to Britain back in 1928. Today, that gift is worth more than 350 million pounds – and remains an unfulfilled bequest. Why? Because the donor was very clear that the money was only to be distributed when it grows to an amount that is sufficient to clear the entire national debt. Sadly, the country cannot access the funds because the national debt currently stands at 1.5 trillion pounds.

The NOT So Well-Intentioned Gift

Michigan millionaire Wellington Burt used his Will keep his fortune out of the hands of his family for over a century. Burt died in 1919, leaving behind a Will that included a provision dictating his fortune was not to pass to anyone until 21 years after the death of his last surviving grandchild. His last surviving granddaughter dies in 1989, triggering the 21-year countdown. In November of 2010, 12 people discovered they were beneficiaries of what came to be known as the “legacy of bitterness,” finally sharing the $110 million fortune.

Why not just give your fortune to random strangers? That’s exactly what Portuguese aristocrat Luis Carlos de Noronha Cabral da Camara did in his Will.  For reasons known only to him, de Noronha Cabral da Camara randomly chose 70 strangers out of a Lisbon phone directory and left his sizeable fortune to them. “I thought it was some kind of cruel joke,” a 70-year-old heiress told Portugal’s Sol newspaper. “I’d never heard of the man.

Charles Millar, a Canadian attorney, died a childless bachelor in 1928. In his Last Will and Testament, he left $568,106 to the mother who gave birth to the most children in Toronto in the 10 years following his death. As you might well imagine, his interesting bequest triggered a race to conceive in what Canadians called “the Baby Derby.” At the end of the allotted time frame, four winners split the grand prize after giving birth to nine babies each during the previous decade.

Jeremy Bentham, an 18th-and-19th-century social philosopher gifted the world his “preserved, clothed body.” Why the world would want his preserved body remains a mystery. Nevertheless, since his death in 1832 his clothed skeleton, topped with a wax model of Bentham’s head, has been preserved in a wood-and-glass cabinet known as the Auto-Icon. Currently, his body resides at University College London, though it is occasionally moved so Bentham can “attend” meetings. The wax head was not part of the original plan. On the contrary, Bentham purportedly carried around the glass eyes that were to be used in his preserved face for years before his death. Alas, the preservation process distorted his face, requiring the wax head replacement. In an even more bizarre twist, Bentham’s real head sat between his feet in the Auto-Icon for many years after his death. It was only removed because it made such an ideal target for pranksters.